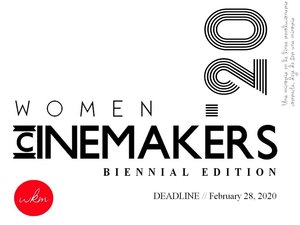 Posted by: WomenCinemakers
WomenCinemakers is now accepting submissions from female filmmakers, directors and producers for its 2020 Biennial Edition.
We are looking for shorts, documentaries and features written, directed or produced by women.

There are five categories that can be entered:

In order to submit your work to the WomenCinemakers Biennale please fill the following application form: http://womencinemakers.com/submit.php before February 28th, 2019. You can fill out our submission form or email us [[email protected]] your proposal including a link to your video and a short description of your film.
There are no application fees.

WomenCinemakers opens up a new space for women directors to share their powerful films and ideas, encouraging mutual exchange where the filmmakers and critics can converge to discuss the becoming of the film industry. Browsing through WomenCinemakers, you’ll find interviews and essays about emerging and established women filmmakers, reports from international film festival such as Cannes and Berlin, with a special look at female artists and professionals embracing leading roles in front of and behind the camera.

Since 2012 WomenCinemakers has been promoting new experiments by creating the section Nine New WomenCinemakers that awards debuts and and innovative films. With a mixture of newcomers and established directors, our annual anthology has featured over the years more than 100 artists, with many of them competing in international film festivals including the Cannes Festival, Berlin International Film Festival, and the Venice Biennale.