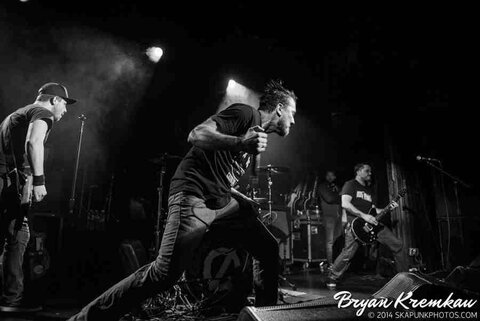 Mesa, AZ based punk rock royalty AUTHORITY ZERO has managed to weather the music industry storm and endure living on the road away from friends and loved ones for almost 2 decades. With four studio albums under their belt, two live acoustic albums, and two EP’s, they appear to be just getting started. Over the past few years the band has broke ground internationally, beginning with shows in Japan, followed by performances at Belgium’s legendary Groezrock, Spain’s Resurrection Fest and UK’s Rebellion Fest amongst countless other European festivals. With tours through Russia and Australia in the works, AUTHORITY ZERO continues to seek new destinations to spread their live show and music.

Initially their goal was simple; create a sound that paid tribute to their punk rock forefathers, but not confined by the musical barriers that typically bound the genre together. Now,18 years later, they have just wrapped on their fifth full-length studio album. Named after the Malcolm Gladwell book, The Tipping Point was recorded with producer Cameron Webb (Pennywise, Social Distortion, Motorhead etc.) at Maple Studios in California. Their latest effort pays tribute to their punk rock forefathers while expanding their musical boundaries into unconventional reggae and rock tinges beyond the typical punk rock aesthetics, creating a whirlwind rock album that will undoubtedly take listeners by storm.

The new album is set to be released on April 2nd via Hardline Entertainment-US/Canada/Japan, Concrete Jungle-Europe/UK and 3wise Records-Australia and will be followed by a heavy touring schedule around the globe. Lead Singer and Front Man, Jason DeVore says “The excitement and anticipation for the new album The Tipping Point that I have is unparalleled,” says vocalist Jason DeVore. “The closest thing I can think of is how I felt when we first released A Passage In Time so many years ago. You feel you’re really doing something right when you and the members of your band are rocking out to it like it’s their new favorite album that just came out. That’s how it should feel. The energy, the intensity, and collaborative sounds along with a new realm of production working with Cameron Webb has made it extremely intense. It’s a taste of the old school and slingshots into new areas and veins of music we have yet to tap into. We’ve also incorporated some surprise elements. It’s an album based on the idea of tipping the scales, unity, causing a ruckus while forging on, and the history and future of all who have been involved and will be for years to come. We’re fired up.”

Eighteen years into their storied career began and Authority Zero has seen their fair share of ups-and-downs. After original guitarist and longtime friend Bill Marcks left the band in 2008, members have seemed to come and go, but the band and music has carried on. Recently, after the release of their last album, Stories of Survival, guitarist Zach Vogel departed the band to return to his home in Wisconsin for more family time. Shortly after that and with the turn of the New Year in 2011, long time friend and drummer Jim Wilcox also left the band to pursue other endeavors.

At this point, many bands would have folded under the pressure of lineup changes and setbacks, but the rest of the band carried on by inviting new recruits and Amarillo, TX native Brandon Landelius on guitar along with legendary punk drummer, Sean Sellers (Good Riddance, Real McKenzies) on drums to restructure and complete the group. With their fifth studio album The Tipping Point, Authority Zero is determined to carry on with perseverance and dedication to spread their music and message to fans around the globe.