no past shows listed 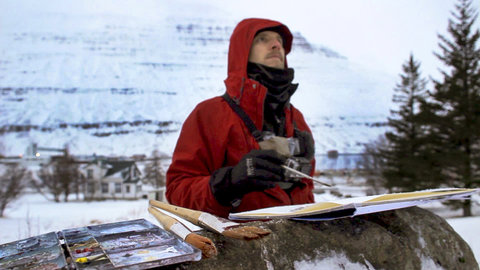 from Victoria BC
http://www.diegonarvaezh.com
other sites:

Diego Narvaez was born and raised in Mexico City. His artistic practice centers on painting and drawing. Narvaez works from plain air experiences to create natural and urban landscapes. Through his art, he reflects on how we construct reality through sight and how the environment influences our perception.
Like a Flaneur, Diego would get lost in non-places of Mexico City, where he realized that memory and oblivion are central in the construction of reality. This reflection first materialized in the painting series Landscape in Transformation, which was presented in the Anahuacalli – Diego Rivera Museum (2014). These paintings already shown a mysterious element appearing in the middle of Mexico City: ice.
The unexplainable passion for frozen landscapes pushed him to participate in artistic residencies in Antarctica and Iceland. These valuable polar experiences molded Diego´s creative process and the way he understands landscape. After seven years of work, several polar series where summarized in the exhibition Ineffable Visions presented in the Cultural Center of the Contemporary Mexico.
Narvaez’s quest for understanding landscape led him to win the first prize of the most important landscape biannual in Mexico (National Landscape Painting Biennial Luis Nishizawa, 2017). On three occasions, Narvaez received the support of the Young Creators Program (2010, 2013 and 2017) granted by Mexico´s Ministry of Culture to work on projects that derived in his most important series. Collectively, he has participated in exhibitions in USA, Argentina, Canada and Mexico.
In 2017, he embarked on his newest project of the North American West Coast. Mesmerized by the immense natural beauty, he and his partner permanently moved to Vancouver Island a few months ago. Currently, he is working on the series Counterpoint where the natural and the urban clash to open questions on how we relate to our surroundings. Victoria, part of Counterpoint, received the Award of Excellence from the Sooke Fine Arts Show (2019).