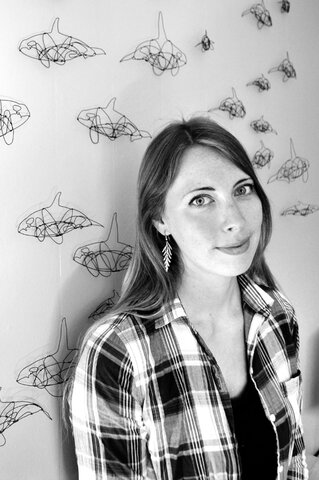 from Victoria BC
http://natashavannetten.com
Past Shows (13)

Natasha van Netten is a Canadian visual artist based in Victoria, British Columbia. Her practice focuses on whales, cetology (the study of whales, dolphins and porpoises) and marine sciences. As a multi-disciplinary artist, she uses a variety of mediums such as oil paint, ink, seawater, paper embossing and metal to conceptually explore scientific information. Her art practice is strongly influenced by growing up along the BC coast and by her experiences at sea as crew on a sailing vessel.

Natasha received a Diploma of Fine Art from the Vancouver Island School of Art in 2016. She was honoured to be a recipient of the Robin Hopper Legacy Award from the Victoria Visual Arts Legacy Society and received an Award of Excellence at the Sooke Fine Art Show in 2018. She has participated in artist in residence programs in the Czech Republic, the Russian Federation and in Iceland. Natasha has exhibited in the United States, Czech Republic, Russian Federation, New Zealand and Iceland. She has also exhibited in various Canadian galleries and venues.