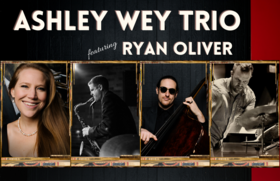 Ashley will be performing primarily her original music from her upcoming album due to be released July 7, with an album release party at Hermann's July 9 and featuring the great Ryan Oliver on tunes she originally wrote for the Tenor Saxophone.

Ashley lights up the stage with her bright smile, charming charisma, and magnificent sounds that open minds and reach hearts. Pianist, composer and singer Ashley Wey is a multi-faceted artist, who is highly regarded for both her playing and her writing as well as how she seamlessly crosses over from indie pop to D&B, hip-hop and jazz.

Ashley with be performing with Hans Verhoueven on drums and special guesting Ryan Oliver on the Tenor Saxophone. This with be a special evening to remember.