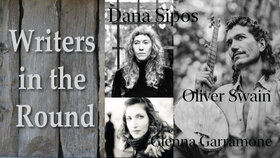 Dana Sipos - Dana Sipos has toured extensively across North America, Europe, Australia and New Zealand in support of her 2018 album, Trick of the Light, released on Roaring Girl Records. The album received acclaim from CBC, The Bluegrass Situation, Penguin Eggs, Folk Roots Radio (UK) and No Depression. Dana was nominated for a Canadian Folk Music Award in the English Songwriter of the year category and shortlisted for the Ontario Arts Council Colleen Peterson Songwriting Award and the Kerrville Folk Festival “New Folk” songwriter competition.

“There’s No Denying She Is One Of The Most Incredible Songwriting Talents Out There.” - Folk Radio UK

“A consummate singer and songwriter with a wholly unique sound." - No Depression

Her newest album The Astral Plane set to release June 25, 2021 is a deeply personal exploration, tracing the imprints of memory that form and take hold over the many lifetimes of a person, a family, the environment. Running parallel to this investigation of family histories and legacies, there are strong undercurrents of collective climate grief, the shifting faces of loss and inherited trauma echoing the ecological crises of our time.

Glenna Garramone - With a style somewhere between Keith Jarrett and Joni Mitchell, Glenna Garramone's songwriting earned her Grand prize in the Artswells Songwriting Contest in 2010, and the award-winning song "Bear Scat" was featured on CBC Radio's North By Northwest with Sheryl MacKay. Inspired by the geography, inhabitants, and spirit of the places she has lived, from Nunavut to Hawaii, Glenna Garramone crafts "raw, emotional, and utterly captivating" songs (John Threlfall, Monday Magazine), using anything from piano, to guitar, to her tap shoes.


Oliver Swain - Oliver Swain got his start performing and writing with many of the US and Canada's most loved roots bands including The Duhks, The Bills, Outlaw Social(Pharis & Jason Romero) and The Red Stick Ramblers. He's a two time Prairie Music Award(WCMA) winner, multiple WCMA & Juno nominee and has a few "M" (Monday Magazine) and Times Colonist Music Awards under his belt. His live performance credits include extensive concert touring across North America, EU and Australia, multiple performances at all major Canadian Folk Festivals and international events including The New Orleans Jazz and Heritage Festival, The Byron Bay Blues Festival(AUS), Tundor Festival(DEN) and Strawberry Festival(USA). In addition to his performance and recording career, Oliver is also a recognized composer having written with the likes of Ridley Bent, Pharis Romero and three time Grammy Nominee Toni Childs. His original scores have run in productions with Kaleidoscope Theatre at the Mcpherson Playhouse(2016/2017), with The Chemainus Theatre Company(2018) and in dozens of smaller theatre and film productions.