Carcass at The Commodore Ballroom 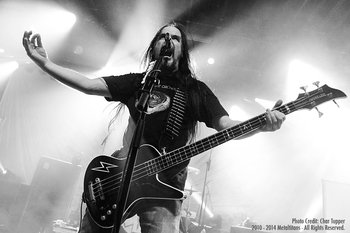 It’s been six long years since Carcass were last in Western Canada, and in the months since the Decibel Tour was announced, an electric atmosphere of anticipation has grown to a fever pitch for tonight’s show. This is shown from the early turn-out for openersNoisem, who waste no time nor energy in getting things started with a blast of aggression, riffs, and good old fashioned death/thrash fun. The young 5-piece from Maryland are clearly psyched to be here, and as vocalist Tyler stomps about the stage and growls maniacally down his mic, it’s impossible not to be reminded of 80’s Obituary or any other now legendary American death metal band. Noisem aren’t doing anything groundbreaking, but the passion and authenticity they put into peddling their old school death/thrash goes down well with a crowd that have turned out to see Carcass, so you know they’re doing something right.

Next up (to the surprise of many…) are Canadian extreme tech-death legends Gorguts. As mastermind and only remaining original member Luc Lemay reminds us, it’s been 25 years since these titans of Canadian metal have played Vancouver, and the anticipation surrounding their return leading up to tonight has compared with that of our legendary headliners. Lemay and his band of tech-death hall of famers proceed to lead the crowd into a trance, veering from the suffocatingly heavy to the hypnotically elegant with unparalleled skill. Lemay leads the show from the wings, caressing his guitar to bring out dancing arpeggios one moment, and hammering it with Olympian stamina the next, all the while maintaining a cheerful exterior that reveals his happiness to be here tonight. Gorguts depart the stage seemingly only an instant after they took it, to both cheers and more than a few grumbles about unwise set scheduling from a crowd rabid for pure unadulterated death metal…

And those people will have to wait a while to get it, as next up are melodic tech-wizards and renowned opinion-dividers The Black Dahlia Murder. Although many are left dissatisfied by their catchy North American take on the Gothenburg sound, they go down a treat with a suddenly enormous crowd eager to expel some energy. The place erupts as soon as TBDM hit the first note, and from then onwards the crowd becomes a sea of bodies, screaming along with vocalist Trevor Strnad and demonstrating the huge appeal of these guys. Strnad and co put on an impressive show, and although musically many in the room are left feeling cold, in terms of performance it’s simply unreasonable to deny TBDM’s ability and place on this tour. RE: the haters – it’s okay for bands to do something you don’t like!

Then the moment finally arrives. These legends of British death metal take the stage to a roar that drowns out intro track ‘1985’, and as the opening chords of ‘Buried Dreams’ blast out from the stage (along with what is still the catchiest use of ride bell known to man), the Commodore erupts into total chaos. It’s been seven years since Carcass reformed, and in that time they’ve played festivals from Noctis to Brutal Assault, and venues all over the world, and so tonight we get an absolutely exemplary set from a band that are as vital and visceral as ever. Jeff snarls and rasps his way through songs from Carcass’ back-catalogue, with the expected new tracks from last years “Surgical Steel” as well as the “Heartwork” classics sitting alongside the not-so-expected tracks from “Symphonies…” and “Swansong”, with “Reek of Putrefaction” in particular sending the beers of old-schoolers flying across the pit. Jeff entertains the crowd with his signature wit and banter between songs – “thanks for having us tonight; we needed the practice!”, and every word he utters into the mic is met with cheers and laughs. Notably his run through of the men alongside him on stage earns particular ovations; “on drums, Dan Wilding – he’s been in some shit bands but we won’t hold that against him!” The carnage rages one last time and the band close with “Carneous Cacophony”, leaving the stage to applause from an utterly rabid and exuberant audience, and proving that they're still as deadly a live act as they were two decades ago.

Hardened rock from Victoria BC

To provide a world class community festival with an emphasis...
2243 Beacon Avenue Sidney BC
Open / Operational

Located in the basement of the Empress Hotel Owner: Canadia...
Closed / Inactive

A gallery and gift shop with artist talks, demos, and more!
Open / Operational