“Now it’s hard to remember it any other way.” Band of Horses singer Ben Bridwell’s compellingly evasive lyrical style will never let the listener on to the exact intent of this line as it appears in “Neighbor,” the expansive Infinite Arms album closer, but taken out of the context of the song it becomes a sentiment of currency. The present state of the band is as close to ideal as rock n’ roll can be. Having assembled a true creative and personal collective, designed and signed the record deal of his dreams, and made a fantastic new album free of any influence other than his onstage brothers in arms, it's hard to imagine that Bridwell cares to dwell on any time but the present. It took nearly 2 years, virtual bankruptcy, five states and a dead falcon to get there, but Infinite Arms is the product of a band doing things on their own terms and finally learning to enjoy the results.

The songs on Infinite Arms project the essence of the different locales across America that became the setting for the recording and songwriting process behind the album. The serene woods of Northern Minnesota and the band’s native Carolinas inspired the songwriting, lending the compositions an air of comfort and familiarity. While those locations helped the songs come to life, the sounds were influenced by the recording settings. The rich musical heritage of Muscle Shoals, AL, the sublime beauty of Asheville’s Blue Ridge Mountains, the glamorous Hollywood Hills and the vast Mojave desert helped yield the group’s most focused and dynamic recordings to date.

Infinite Arms was a group effort in the truest sense of the phrase. Trading song ideas remotely and then joining in the studio to work through arrangements led to writing credits for all five band members throughout the record, making the album a reflection of the taste and style of each Horse. Bridwell is the lone constant member since Everything All the Time, the band’s 2006 debut, but if you ask him he might tell you that Infinite Arms is just that: a debut in the sense that he entered the studio for the first time with a group of musicians working together as a cohesive force. All members made invaluable contributions to the inimitable sound that Bridwell has crafted since the band’s inception.

Band of Horses is Bridwell, Creighton Barrett, Ryan Monroe, Tyler Ramsey and Bill Reynolds. The quintet have long standing ties: Monroe and Bridwell played baseball together in grade school, Ramsey and Reynolds cut their teeth in the same Asheville, NC music scene, and Barrett met Bridwell at a party as teenagers, where they bonded instantly over a mutual obsession with Dinosaur Jr. Over the course of a few years, they gradually synched up. Barrett appeared behind the kit on Cease to Begin, while Monroe joined the band on keys toward the end of the writing process of that record. Reynolds came into the fold almost by accident as he happened upon a recording session with the band at his friend’s Echo Mountain Studios and joined the touring lineup soon after. Ramsey, already an established solo artist, joined after Reynolds introduced him to the band in 2007, starting to tour just prior to the release of Cease to Begin and opening the shows with a set of his own material.

The novelty of and high hopes for these new members demanded a completely uninhibited recording process. Anything less would have been disservice, and recognizing the most important element used to exert influence, Bridwell decided the only way to insure creative control was to finance the record himself. The result was liberating, the only dictator the creative muse . The band obeyed its every order. Strings and horns were brought in, guitar players played percussion, vocals were run through the same reverb tanks that treated the Beach Boys’ “Good Vibrations” and a backyard amphibian chorus sang the title tracks’ outro. Studios, engineers, pizza and whiskey are not cheap however, and near bankruptcy from recording costs prolonged the albums completion as the band had to spend time on the road to afford the next session. The resulting shows were among the best in the bands history. A sold out Carnegie Hall, epic festival sets, the now customary New Years Eve shows in Atlanta, and performances with musical idols Neil Young, Willie Nelson and Roger McGuinn kept things fresh and vibrant. The touring also helped combat studio malaise, and allowed the band to enter each recording session recharged and armed with new ideas. The thrill of honing the new material in a live setting gave the songs an edge that is difficult to capture when sedentary.

While the band initially enlisted their long time producer Phil Ek to take the helm, scheduling conflicts led to a band decision to produce the majority of the record on their own. This unexpected occurrence added another dimension to the credence of freedom that seeped into every aspect of Infinite Arms.

The freedom was not limited to the music. The band was looking at landscape of the business with a fresh perspective as their contract with Sub Pop had expired. Armed with their finest work to date, the band began entertaining suitors in the search for the one who would understand Bridwell’s vision for a new record deal. Perhaps ironically, part of this deal involved Bridwell returning in a certain fashion to his first role in the business - a label president. Predating any foray into musicianship, and completely oblivious to his talent at the time, Bridwell started Brown Records while living in Seattle. "Brown Records came about thanks to two major factors. I had talented friends and I hated my job." he says. Those talented friends were a band called Carissas Wierd."I always considered myself their biggest fan and supporter so around this time I decided it was up to me to see that these recordings were available to any local set of ears willing to listen. I had moved up from my dishwashing position to line cook now and was making good tips, but held tons of resentment for a lot of the management, promoters, and even some bands that I was feeding every night that I felt treated me like a second class citizen, only there to cook for them and deal with their sometimes devilish moods. I retaliated by saving every shitty tip I got at the end of the night and stuffing it into a dead space in a stereo speaker. I'd have to crack the thing open like a piggy bank one day and ruin my listening environment to get it out, but for good reason. There was little doubt in my mind that the plan would work. I just didn't figure how well it would work. "

"I finally cracked my speaker open one day to reveal what I would think was probably around five or six hundred dollars. This was hardly enough to press a batch of 1,000 cds at the time, so I weaseled a loan out of my father for the rest of the cash. With a wonderful crackpot team of art director Jeff Montano and mastering engineer Joe Crawford (RIP) we got all the specifics together and pulled off the remarkable feat that was BROWN 001 Carissa's Wierd 'Ugly But Honest: 1996-1999'" A label boss was born. Bridwell continued to release records by Carissas Wierd and other local acts including S and Aveo, and eventually joined Carissas Wierd as the band’s drummer, leading the way to the discovery of his musical talent, a fortunate occurrence for his fans.

Brown eventually became a distant priority behind Bridwell’s new day job as a professional musician, but his passion for discovering and nurturing talent never left. When it came time to haggle with label suitors, he insisted on resurrecting Brown as an imprint to release the Band of Horses record through in conjunction with Fat Possum and Columbia, and to ultimately discover, nurture and release new talent , with his friends at Fat Possum handling marketing and distribution.

Infinite Arms continues the collaboration between the band and their aesthetic director Christopher Wilson. Bridwell and Wilson have a long standing friendship that dates back to their meeting in Tucson, AZ and subsequent days of washing dishes together at famed Seattle club The Crocodile. They added a professional element to their relationship when Wilson began designing Band of Horses album artwork beginning with the first record, and going on the road with the band as their photographer, while also running the projections that appear on the backdrop behind the band at each gig. An extremely talented photographer of natural landscapes, Wilson’s view of the world has added the perfect visual accompaniment to the band’s sound. Wilson’s photographs and drawings will grace all versions of Infinite Arms, including the stunning deluxe edition which consists of the 180 gram vinyl, LP, CD, DVD featuring HD videos for every song created by Wilson and synched to a 5.1 surround sound mix by Elliot Scheiner, all packaged together in a 100 plus page coffee table book featuring Wilson’s nature photographs.

The title of the record is another Bridwellian play on words. He'll never let on to what it means, the only hint that it’s a phrase possibly misheard by thousands of people every day. Dwell on that one if you want to drive yourself nuts. Or, subscribe to Bridwell’s philosophy of celebrating the present and embracing the future, both of which will find Band of Horses trotting the globe as they share the fruits of their labor with the world. 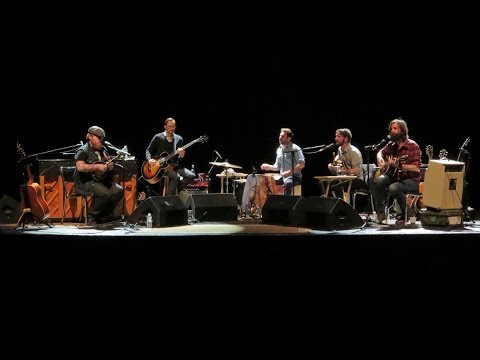