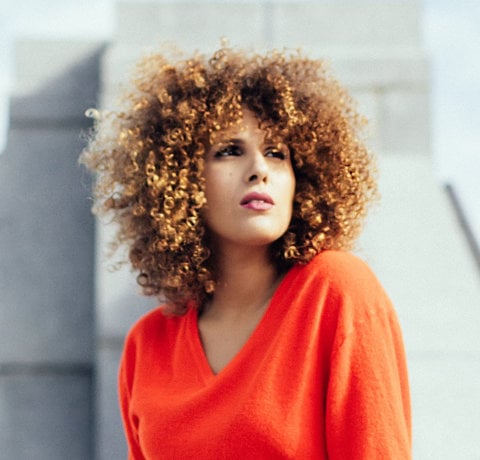 from Montreal Quebec
https://www.meryemsaci.com/
Past Shows (1)

Meryem Saci is a singer, songwriter and emcee with a vibrant vocal range that reflects the diverse influences of her upbringing. She commands the stage with her powerful voice, and eclectic fusion of sounds ranging from R&B, Hip Hop, Soul/jazz, Reggae to celebrating resilience with primal, high energy Afro-Arabian rhythms.

Meryem explores ways to reflect in her sound the connexion with traditional instruments and digital production. She likes to work with beat-makers and bring in musicians to add an authentic sound to the digital base.

Lead singer of the multilingual super group Nomadic Massive , which has been voted as the top hip hop act in Montreal for five years in a row. The group has opened for Mos Def, Deltron 3030, Wyclef Jean, Public Enemy and Busta Rhymes to name a few. They have been touring France, Spain and Canada extensively in the past 3 years and are about to release a new EP to support the coming tours. Meryem has performed internationally both with Nomadic Massive, The Narcicyst and as a solo artist in Africa, Europe, the Middle East, Latin and North America.

Meryem’s solo project, On My Way , is an introduction to her diverse sonic universe as an artist seeking refuge, guidance and solace in music. The mixtape, co-produced with composer and producer Mario Sevigny , is infused with first account stories of love, determination, struggle, social commentary and displacement. The project came together organically, creating an upbeat, fun and moving sound that bridges influences from both sides of the atlantic.

Meryem was featured on IAM's latest Album "Rêvolution" on the song "Bien plus beau " that was selected as the official soundtrack for the Netflix Marvel Original “Iron Fist “.

As a solo artist, her title song “On My Way” was featured in Lululemon’s and Dynamite ad campaigns of 2017 along with “Concrete Jungle” and “Empire Fall” . Also, Meryem’s music was also featured on a few TV Series including the Hit Show ‘The Art of More’. She was invited to present her new solo project upon release at the Montreal international Jazz Festival 2017.

Meryem is a passionate changemaker and remains actively involved with different community and charity events, performing and hosting writing workshops at Canadian and American high schools and universities. She is frequently invited as a speaker to talk about her experiences as a refugee and an artist .