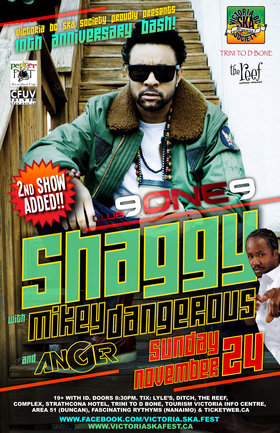 Be sure to become a member to receive news on exclusive members only shows, and discounts on Full Festival Ska Fest passes and more!

With a commanding presence, a distinctive voice that is recognizable throughout the world and titles such as artist, businessman, philanthropist and Grammy Award winner, Shaggy is and has been a forced to be reckoned with. A son of the brambly streets of Kingston, Jamaica, his discipline-which he credits to his military background-has been the foun... more info

Mikey Dangerous captivates audiences with his powerful voice and energetic performances. He is a hidden gem in the dancehall/conscious reggae world in Canada. Mikey Dangerous has played alongside many of the who's who of reggae throughout the world. Within Canada he just finished headlining the Saskatoon Reggae Festival and he has also played at th... more info
Videos:

Videos of this Event

You Girl & Fight This Feeling

My Worst Mistake
Submit info on this show to our admins