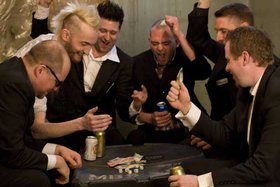 Music: Pop / Rock / Indie, Punk / Metal / Hardcore, Reggae / Ska / Dub
After you are mesmorized from seeing Barrington Levy, Fishbone, Hillside Hooligans and DJ Dubconscious play at Ship Point Inner Harbour, come down to Lucky Bar to catch Ska Fest veterans from Edmonton - Mad Bomber Society with hometown guests of honour Everybody Left and Blackwood Kings (who will be playing on Ska Fest for their first time).

Admission is through purchase of a Full Fest Pass or you can purchase a double ticket to this show and Barrington Levy/Fishbone for $52.50 on ticketweb.ca

Mad Bomber Society is a seven-piece band from Edmonton playing heavy, danceable ska influenced by the instrumental sound of the Skatalites, the attitude of the British 2-Tone movement, with touches of 60's groove, surf, and rockabilly more info
Audio: No Guarantees

Now five years into their lifespan, Blackwood Kings has proven to be one of the more unique bands to pop up in the Victoria BC scene. In spirit and ethos, they’re a punk band, but while contemporaries may lean towards buzz-saw-distorted guitars and shouted vocals, Blackwood Kings favour the reverb-laden upstrokes of ska and dub, producing a polit... more info
Articles: Interview with BLACKWOOD KINGS
Videos: