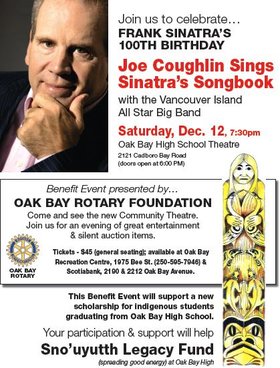 Joe Coughlin has an impressive voice that has taken him to North America’s finest clubs and on tour with legendary artists such as Dizzy Gillespie and Woody Herman. 2008 and 2009 National Jazz Award winner “Male Vocalist of the Year”, Joe keeps turning out great recordings (2009’s live Lowdown West Broadway is a treat). Once again appearin... more info

Bruce has been an active writer and performer of jazz both locally and internationally. He holds a Masters degree in music composition and theory, and has had a musical career spanning over 30 years. In Canada he has performed with artists such as Michael Buble, David Foster, Rob McConnell, Maria Schneider, The Glenn Miller Orchestra and The Tempt... more info

Alfons Fear is a versatile trumpet player. A native of Victoria, Alfons performs jazz, classical, and contemporary music. He has a B.Mus. (2014) from the University of Victoria majoring in music composition and a diploma in jazz studies from Humber College (1994). At UVIC Alfons studied composition with John Celona and studied trumpet pedagogy with... more info
Submit info on this show to our admins