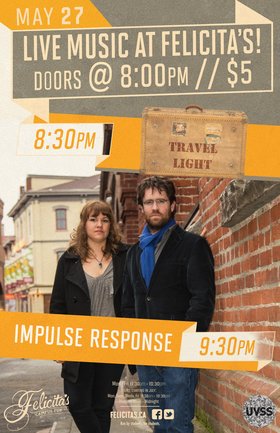 Impulse Response is Victoria’s funkiest soul, groove, and R&B trio. The group is small with a big sound. Shanna and Alexander front the band as lead vocalists. With tight and punchy grooves, their sound is infused with sweet and soulful harmonies. The bands influences include: Soulive, Aretha Franklin, Bill Withers, The Meters, Herbie Hancock, Ju... more info

other sites: myspace
Alexander Ferguson brings you pop songs with soul. Following in the footsteps of artists such as John Mayer, Jason Mraz, Maroon 5, Jamie Cullum, The Dave Matthews Band, and Stevie Wonder, Alexander performs heartfelt original songs that you can also groove to. Alexander is also a founding member, singer, and keyboardist with the rhythm, blues, and ... more info

Shanna is a young singer who sounds like shes been singing for decades. She has the abilities to capture the old and pure sound of a traditional jazz standard. She can have the soft, soul touching sound of an Eva Cassidy ballad; the jazzy qualities of Annie Ross or belt a soulful tune like Dusty Springfield. Shanna has always been a singer, since ... more info
Audio: St. Louis Blues, Come Away with me
Videos:

You Make Me Feel Like A Natural Woman - Cover by Maureen Wa...