Few countries love the fiddle as much as Canada, and few young Canadian fiddlers...

from Victoria BC
Available for Shows/Gigs

Few countries love the fiddle as much as Canada, and few young Canadian fiddlers today can show off the breadth and range of fiddling like the youth fiddle ensemble, Coastline.

Coastline is so excited to be taking their Canadian West Coast Fiddle sound to Ireland. Coastline will have the opportunity to perform, collaborate with other musicians, attend workshops and visit the local sites while soaking up the undoubtedly life-changing experience. These opportunities reflect Coastline’s deep commitment to learning, sharing and improving quality of life through music and proving that music has no boundaries.

“... Coastline is one of those bands that habitually creates magic when they step on stage. On top of the prodigious talent and gifted technical abilities evident in each member, Ivonne and the kids bring an irresistible verve and life force to their live performances. I’m excited, every time I see them, and so has every audience I’ve been a part of ... “
~ Kelly Nakatsuka (Artistic Director - Cowichan Folk Guild / Island Folk Festival)

Ivonne Hernandez, is one of Canadas most decorated fiddlers and a sought after musician both on and off stage. As a performer, teacher, session player and arranger on many critically acclaimed recordings and film scores, she has mastered Canada’s traditional fiddle music. She embodies the country’s 21st century multiculturalism and her music and teaching reflect the new century’s marriage of cultural influences. Ivonne transforms her folk music roots into an exciting and dynamic new form. She brings this wealth of experience and knowledge to Coastline weekly as their Artistic Director and is thrilled to be embarking on another worldly adventure to Ireland with the amazing young musicians in Coastline.

Terry Boyle is from Dublin, Ireland. He arrived in Canada in 1989 after a successful six-year stint playing music in Boston, New York, Vermont, and Austin TX. With numerous TV and radio appearances in Ireland as part of a group, and a solo album of traditional Irish folk songs, he released an album of original songs in 1997. Having given up his day job as an elementary/high school teacher, Terry now has the time and drive to create more music and is looking forward to collaborating with other musicians and sharing his Irish culture through music and song.

Anne Louise Genest is an artist who sings and plays with the spirit of an old storyteller, creating songs stepped in the flavours of old time mountain, Appalachian, and traditional country and bluegrass music. With guitar and banjo in hand, she has spent years chronicling the rural life paths of Canada, writing songs to tell the tales of the hard-hit, hard-won victories of these everymen and women. Beautifully creative songs and tunes range from rousing and boisterous to gentle and poignant, and map a homes cape of hard-drinking grandmas, rural dancehalls, blue collar fashions, small towns, big cities. All of this is delivered with Genest’s vocal warmth.

Over the course of Coastline’s relatively short history of 4 years they have had the pleasure of working and collaborating with some of the world’s top musicians such as Alasdair Fraser & Natalie Haas, The Fretless, Mairi Rankin, De Temps Antan, Colleen Eccleston, The Gettin’ Higher Choir, Oliver Swain and Daniel Lapp to name just a few. They also released two full length studio albums. Their debut Album “Coastline” received two nominations from the Canadian Folk Music Awards, Young Performers of the Year and Instrumental Group of the Year. This album underscores the power of Coastline’s musicianship and range of their vision and passion. The “High Drive” is Coastline’s second studio album. Throughout the 12-tune album, Coastline draws upon their deep well of talent and tradition to make music whose sonic and emotional appeal transcends time and genre, demonstrating an effortless rapport that underlines the groups love of the fiddle.

Come and harness the irresistible energy of this talented troupe of young musicians and their special guests. An epic event not to be missed, all while having fun and supporting live music and our talented youth on Vancouver Island achieve their goal of Reaching Ireland. 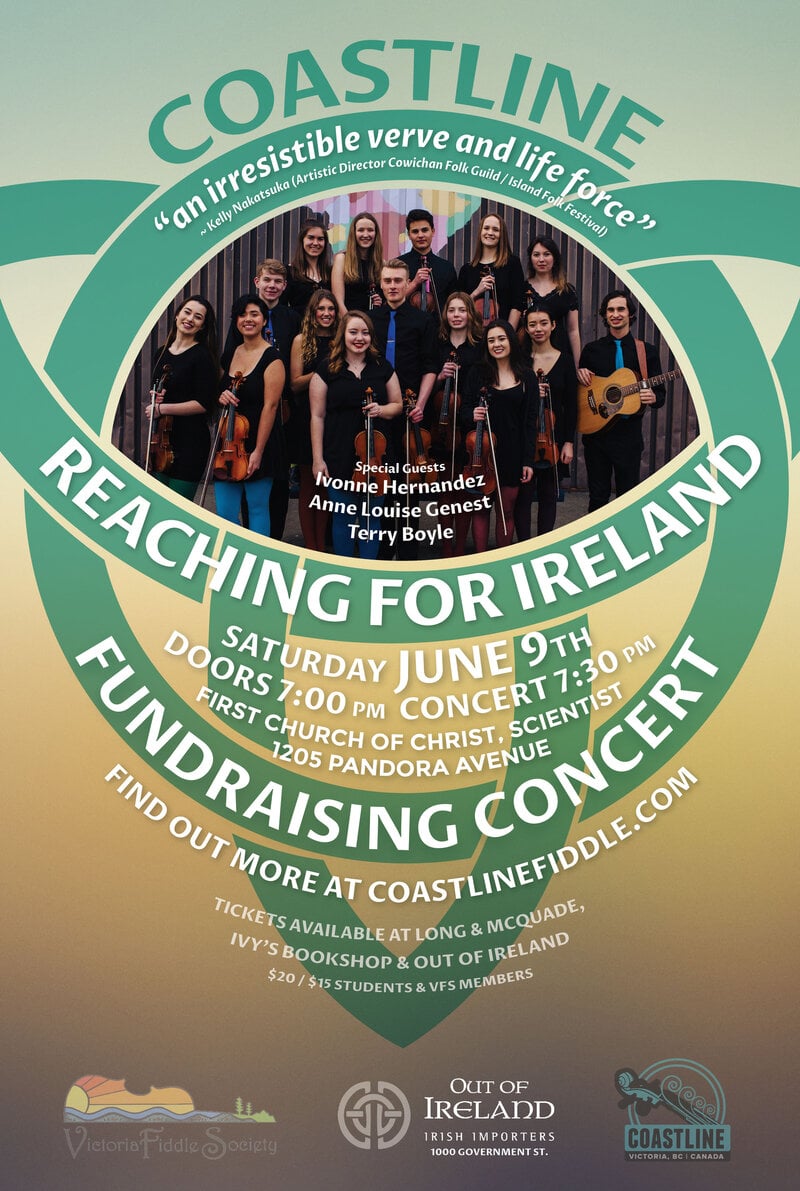