Original Americana from Vancouver BC
Available for Shows/Gigs

Production & promotion of live music events at a variety of ...
2560 Vista Bay Road, Victoria, BC Victoria BC
Open / Operational

After touring for the past decade to the UK, Canada and parts of the USA, world acclaimed Petunia and the Vipers make another breakout tour, with their last four album releases all going to #1 on the Canadian Folk/Blues/Americana charts. Louis Armstrong was once asked what his favorite kind of music was, and his response was simple; “Good music”. Petunia & the Vipers’ sound may not sit comfortably in one certain genre, but “Good Music” describes it well. Together with his band the Vipers they play original music combining elements of classic 1920’s, 30’s 40’s, 50’s, 60’s, and 70’s country, country blues, western swing, alt country rock, Mexicana, French cabaret, Romanian, ragtime, jazz, punk and folk music’s. A new music that springboards off of music of the past and jumps into the present day, left with only echoes of the past… Something in between 1920’s and steam punk.

Petunia is no stranger to being a “road dog”. He’s spent most of the last 23 years crisscrossing sections of Europe, North and South America, playing his old hobo haunts, hitch hiking junctions, street corners, dive bars, churches and run down theatres. He’s more than just an entertainer, he’s a modern musical enigma. Imagine that David Lynch and Nick Cave had a hillbilly baby, that yodeled… or Tom Waits meets Elvis at Woody Guthrie’s hobo junction. This is just one way of describing the man known simply as Petunia. He’s an adventure seeker, a poker player, and a mysterious stranger. He’s been referred to as “The Savior of Country Music”, and a man who exists in a different era, bringing the past forth as something new to be celebrated and not forgotten. A restless wanderer, a musical historian, and a quirky yet amazing talent, Petunia joins the greats from north of the 49th for his classic style and raucous performances. He is simply a Canadian treasure.

It wasn’t until he fell in love with the west coast that he would be compelled to settle down for a brief period over a decade ago, and “The Vipers” would gel together into a bonifide music band. Although The Vipers would go on to include over 8 different guitar players at various times during their inception, including the likes of Paul Rigby (who went on to play with Neko Case among others) and then Paul Pigat (Gretch now builds guitars for Paul to play and represent the company name), Petunia and the Vipers now include Stephen Nikleva on electric guitar. He’s a 40+ year veteran of the touring circuit and former member of Ray Condo and the Ricochets fame, as well as the Sarah McGlaughlin band. He has been quoted by Exene of the punk rock band “X” as being “One of the 10 best guitar players alive today” and noted by Dave Alvin (“and the Guilty Ones” band) to be, “the intimidating guitar player”. Stephen is joined by Jimmy Roy on the lapsteel guitar (an early version of the pedalsteel guitar), perhaps one of the last great lapsteel guitar virtuosos still alive and touring. Another 40+ year touring veteran, Jimmy has played with Wanda Jackson, Ray Condo and the Ricochets, Big Sandy and his Fly Rite Boys, and a host of other Canadian roots bands. Together these two vets form the musical foundation of the band dealing out fiery solos and lush arrangements.

Aside from playing songs from their last 6 albums, on this tour the band will be featuring their latest release “Lonesome, Heavy and Lonesome”, perhaps their most sophisticated and varied release to date. 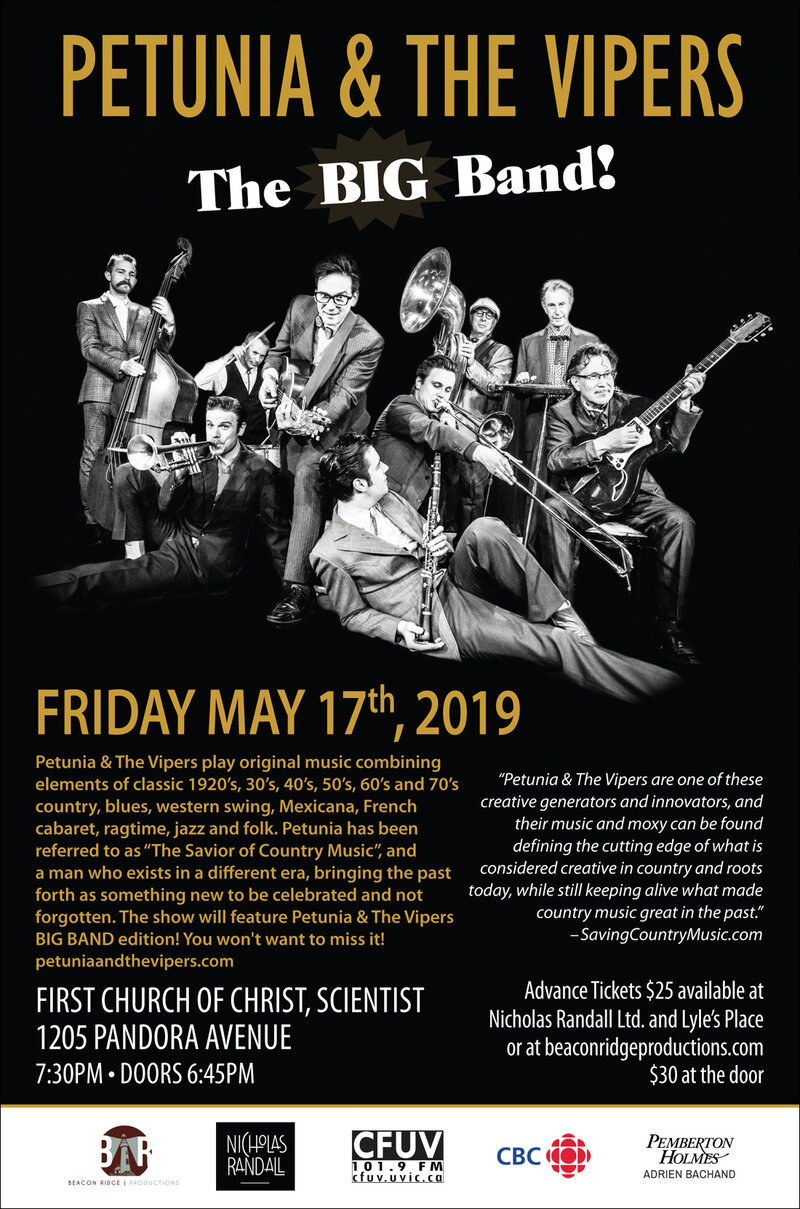