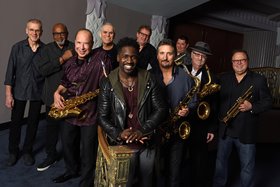 Music: Funk / R&B, Jazz / Blues, Pop / Rock / Indie
Formed in 1968, California music legends Tower of Power have forged a reputation as high achieving artists fluent in all realms of soul, rock and pop music with a punch like that of a jazz big band. Their 50th anniversary album, released via Mack Avenue Records in 2018, is a labour of love, definitively titled Soul Side of Town. They release their new album, Step Up, in March 2020. They last appeared at TD JazzFest in 2015 and now, these decorated veterans have custom crafted a hair-raising audio experience for the 2020 festival that long-time listeners, music connoisseurs and a new generation of funk-lovers will groove to for years to come.

other sites: myspace
Katherine Penfold is America’s “Urban Mary Poppins”. This British-bred, vibrant singer/songwriter is the perfect blend of elegance and vivaciousness; creating the soulful, pop sound that is uniquely hers. Starting at a later age than most recording artists, Katherine wasted no time getting her foot in the music industry door. Having just r... more info
Submit info on this show to our admins