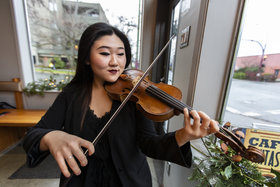 Music: Classical
As the violin travelled north from Italy, it was eagerly adopted by a new generation of French composers and given a distinctively French twist in the form of sonatas for a pair of violins. Jean-Marie Leclair and Jean-Pierre Guignon both contributed to this playful genre, brought to life by Victoria native Chloe Kim and her colleague Elyssa Lefurgey-Smith.